Our Story and History of the Royal Deux-Ponts (Zweibrucken) Regiment

After the American-French Alliance of 1778, the French committed ground forces to the American cause, first appearing at the Battle of Saratoga and later at Yorktown. The French expeditionary force was under the command of Jean-Baptiste-Donatien de Vimeur, Comte de Rochambeau. His force consisted of seven regiments, one of which was the Regiment Royal Deux-Ponts.

The Regiment Royal Deux-Ponts was formed in 1757 by Duke Christian IV of Pfalz- Zweibrucken. The Duke, indebted to Louis XV of France, pledged his army to the French. It served France throughout its existence, even though it came from a Germanic region. The "two bridges" area (Deux-Ponts/Zweibruken) shifted over time between the French and the Germans but the Regiment's loyalty never did. Its blue uniform coat with its yellow facing, by coincidence, happened to be the colors of George Washington's uniform during the American Revolution.

The Regiment deployed with Rochambeau's army, and although composed of big robust men, suffered the loss of nine men during the 72 day crossing to America with more than 450 sick at the time they disembarked. The Regiment was commanded by Guillaume Christian, Compte Deux-Ponts, and was composed of 69 officers and 1031 men. Rochambeau had specifically requested the Regiment because of its fighting reputation. One of the regimental officers, Baron Ludwig von Closen was chosen as Rochambeau's aide-de-camp.

The Regiment suffered its greatest losses at Yorktown (losses greater than any other unit in the battle), with 46 killed and 68 wounded. Many more died subsequently of their wounds. They had faced the Hessian troops at Redoubt 9. Here Germans fought Germans. General Washington presented the unit with one of the captured cannons of General Lord Cornwallis. Compte Christian was able to send, along with Rochambeau's dispatches, captured British colors to the French King. King Louis XVI awarded Compte Christian the Order of Saint Louis (among the highest French military honors) and in January 1784 promoted him to Brigadier General. In 1788, he was promoted to Major General at age 35.

In 1790, the French ceased recruiting Germans and the Regiment lost its designation of "Royal." It was designated as the 99th French Infantry Regiment and served France through World War I and II, as well as in Lebanon in 1980 and Bosnia in 1990. Its 240 year history ended in 1997 when, because of down-sizing of the French military, the Regiment was disbanded and its colors retired. 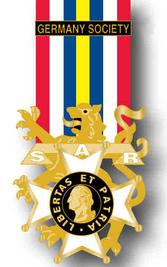 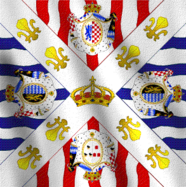 Sons of the American Revolution

Royal Deux Ponts (Zweibrucken) Regimental Flag for the German Regiment under command of Lieutenant General Rochambeau at Yorktown, in 1781 a decisive battle of the Revolution with this unit taking Redoubt 9 at the Battle of Yorktown leading to the surrender of the British forces under command of British Lord Cornwallis.